This site uses Cookies. By continuing to browse the site you are agreeing to our use of Cookies.

We use essential cookies to make our site work. We also set optional analytics cookies to help us improve your experience on our site and to show you relevant advertising. We won't set analytics cookies if you disable them. For more detailed information about the cookies we use, see our Privacy notice.

Essential cookies enable core functionality such as security, network management, and accessibility. You may disable these by changing your browser settings, but you may not be able to access all or parts of our website.

We use performance, usage and targeting cookies to help us improve our website by collecting and reporting information on how you use it. The cookies collect information in a way that does not directly identify you. For more information on how these cookies work, please see our Privacy notice.

Before and after: how Zumba is shifting the reason we do exercise

When we’re following a fitness regime, it’s easy to become fixated on before and after “fitspiration” comparison images and measure the success of our workouts on our weight. But do we ever stop to consider how much of a positive impact exercise has on our mood?

Zumba, the Latin-inspired dance exercise, has been praised for its ability to boost energy and melt stress levels by purely focusing on movement and music. Zumba works muscles all over the body, raises the heart rate and tones the body without feeling like a workout, which is perfect for those who find it hard to concentrate through traditional gym sessions.

To test how fitness affects mood over body image, Better conducted a social experiment with a Zumba class. We asked the group to do two things both before and after the session. First, the Zumba-goers took a group photo, posing in a position that represented how they were feeling at the time. Next, the group were given a questionnaire with a list of emotions, such as refreshed and happy, and were asked to rate their mood on a scale of 0-4.

The before and after photos show the physical impact of the group while the survey reveals how the group’s feelings changed.

The physical effects of Zumba

We asked a trainee clinical psychologist, Hannah Baker, to analyse the difference between the two shots based on the position of the group, body language and facial expressions.

In the photo taken before Zumba, the group is bunched together, with some hiding behind one another, which could indicate self-consciousness or embarrassment. 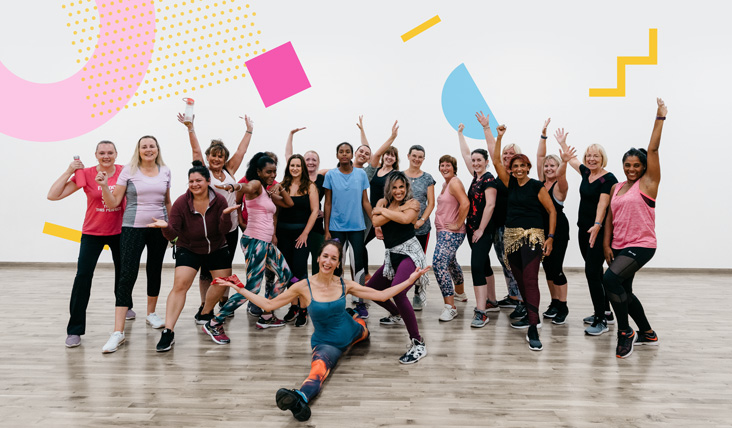 In the shot taken after the class, the Zumba-goers appear more spread out, with open body postures and genuine smiles.

How does Zumba affect your mood?

The questionnaire given to the class-goers before and after the Zumba session asked them to rate several different moods, including how happy, energetic, enthusiastic, upbeat and revived they felt. In general, every feeling the individuals were asked to rate improved as a result of Zumba. 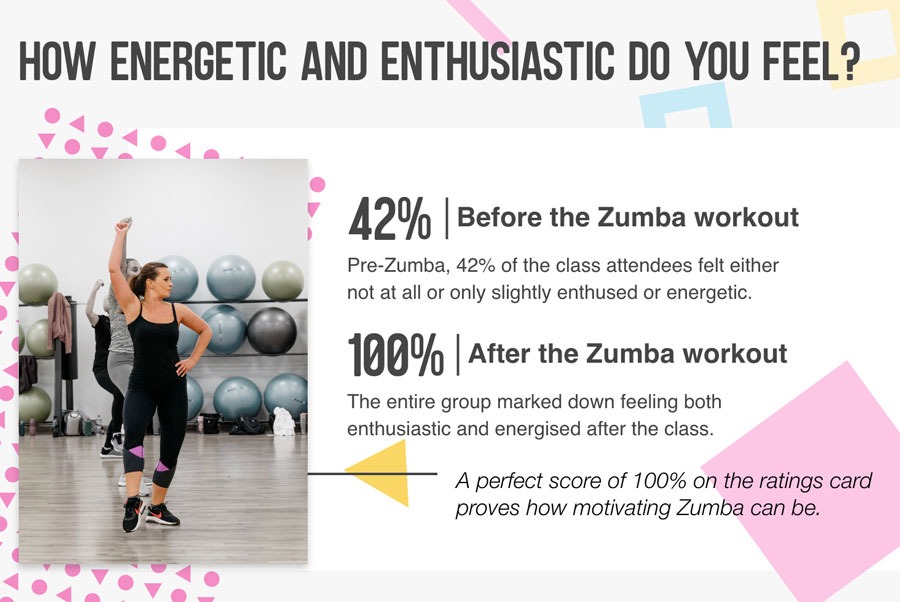 Once you begin dancing to the salsa, flamenco and merengue-inspired music that fills the room, it’s hard not to feel more energised. Keeping up with the steps combined with the fast beat gets the blood flowing, making you feel more enthusiastic. 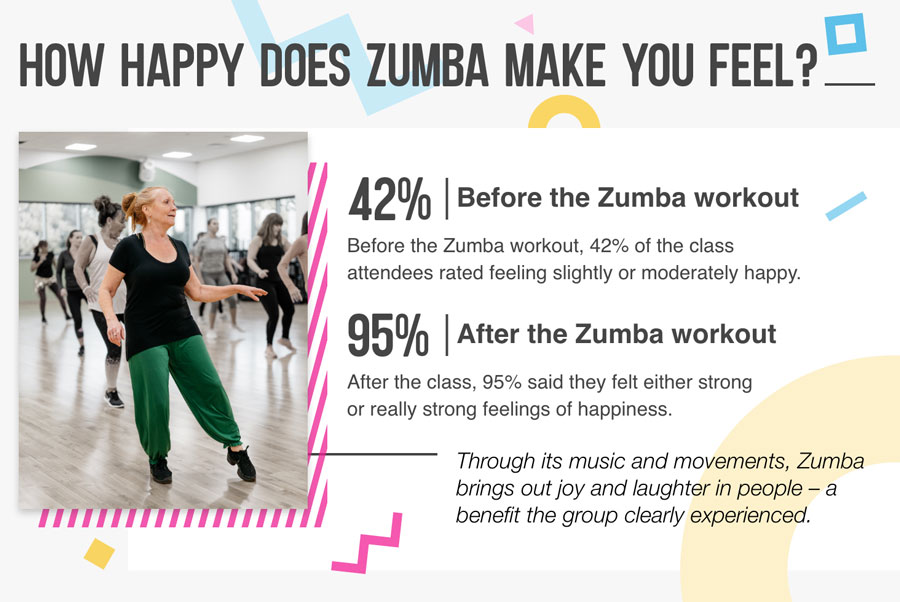 The mix of fun beats, as well as the fast and slow intervals throughout a Zumba workout, meaning it’s considered aerobic cardiovascular exercise. Exercises that raise the heart rate releases endorphins, which naturally produce senses like joy. The trigger of endorphins along with how entertaining the class-goers found the session could explain the rise in happiness levels. 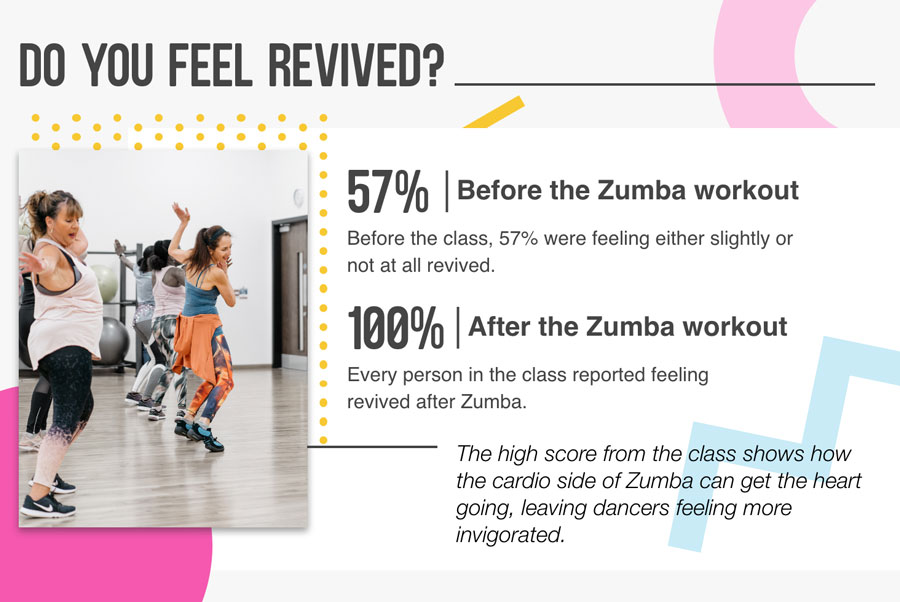 Turning your attention to coordination focuses your mind on an activity instead of the daily stresses whirring through your head. Concentrating on something positive left the class feeling refreshed as every Zumba member said they felt revived after the session. 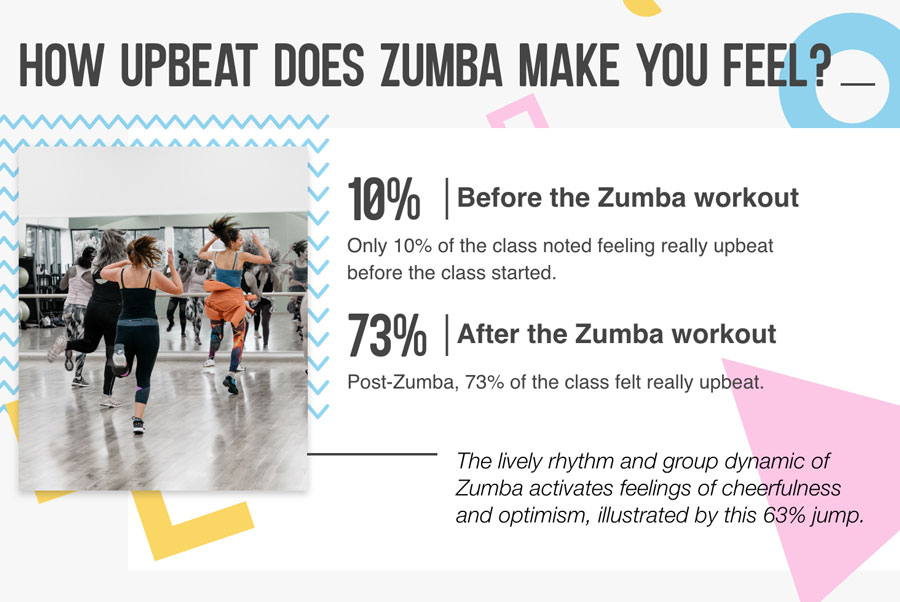 Zumba classes are high-energy, usually involving jumping, bouncing and even clapping. While these moves can be tailored to accommodate different levels of fitness, Zumba is as high impact as you make it. The lively music and encouraging atmosphere made nearly three-quarters of the class feel more upbeat after Zumba.

“The benefits of exercise on mental wellbeing, self-confidence and motivation are well established. Here, our findings suggest these benefits were subjectively experienced by the Zumba goers after just one class. It’s likely these benefits, among others, would continue to develop following multiple classes.”

Busy schedules and fitness goals mean we tend to put the physical improvements of exercise above how it will make us feel inside. But too much stress and anxiety can have harmful effects on our daily lives, so taking stock of how we’re feeling and making our mood the priority should be at the forefront of our workouts.

The results in both the picture analysis and questionnaire prove that Zumba has the power to have a really positive impact on mood.

While Zumba does have physical health benefits, like muscle toning and strength, this social experiment shows how much more beneficial Zumba can be beyond burning calories and comparing body sizes.

Find a Zumba Class Near You

If you feel inspired and are ready to experience all the benefits of Zumba, you can find a Zumba class today at your nearest Better centre.

Forget the stereotypes, find out why yoga is for everybody and the benefits of this popular activity

Read yoga for everyone

What is group cycle?

Dive in at a local swimming pool near you

Find a Better centre near you