This site uses Cookies. By continuing to browse the site you are agreeing to our use of Cookies.

We use essential cookies to make our site work. We also set optional analytics cookies to help us improve your experience on our site and to show you relevant advertising. We won't set analytics cookies if you disable them. For more detailed information about the cookies we use, see our Privacy notice.

Essential cookies enable core functionality such as security, network management, and accessibility. You may disable these by changing your browser settings, but you may not be able to access all or parts of our website.

We use performance, usage and targeting cookies to help us improve our website by collecting and reporting information on how you use it. The cookies collect information in a way that does not directly identify you. For more information on how these cookies work, please see our Privacy notice.

How has women’s sport changed in the last decade?

Nowadays, you’d have an easy time listing the names of famous women athletes or spotting coverage of women’s sport in the media, but this hasn’t always been the case.

For years, women competing in sport weren’t given the attention they deserved. But how drastically have things changed?

Taking a trip back in time, we collected data from the biggest events in women’s sports from 2010 until now. With this snapshot in full view, the big picture revealed just how much of a transformation has taken place.

How has prize money for women’s sports changed over time?

Prize money for women’s sports has increased over the last 10 years and there has never been a better time for women to be on the playing field. Tennis has always offered the largest cash prize, but women’s football winnings saw a sharp rise in 2019 – growing by 153% since the previous World Cup.

Women’s netball was finally rewarded this year, having struggled to offer prize money in the past. This could be because 2018 was such a successful year for the England national netball team – after winning the Commonwealth Games, awards from the BBC, Sunday Times and BT as well as a partnership with Nike. 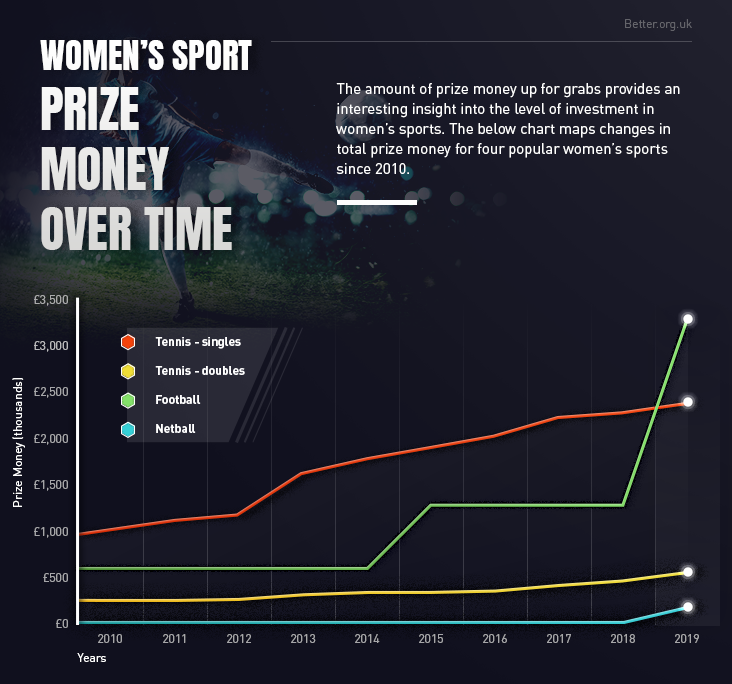 What sports appear on Forbes’ list of top-earning women athletes?

The income from tennis players has always made up the majority of the list (79% over the decade), however, 2019 is the first year the Forbes’ list of top-earning women athletes consists entirely of tennis players. Tennis, racing and ice-skating were the top three sports with the wealthiest women over the past ten years. 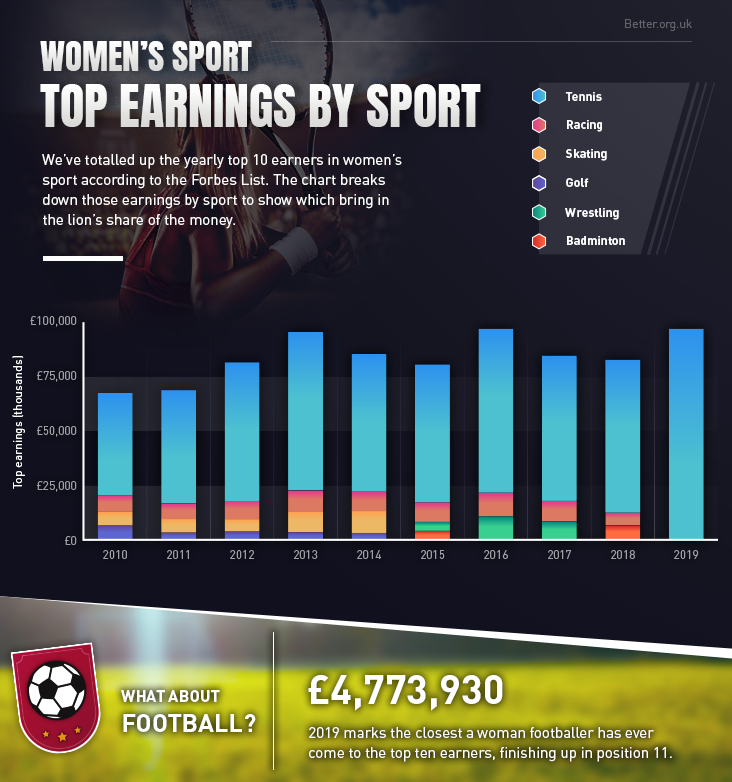 How are women’s sports represented in the press?

After analysing the top 100 headlines surrounding women’s sports every year for the past decade, Better found netball is the most positively covered women’s sport while coverage of women’s football is increasingly optimistic. Cricket has generated more joyful headlines recently than any other sport.

While women’s netball coverage has remained relatively steady over the last 10 years, the spikes across other sports can be linked to specific sporting events:

• Heightened positive cricket coverage was given in 2011, which was also when the women’s team saw victory in the one-day series and Twenty20 series.

• In 2013, the women’s England football team won the Cyprus Cup for the second time, the Liverpool team won The FA WSL title and Arsenal lifted The FA Women’s Cup.

• The Women's Rugby World Cup final was claimed by the women's England rugby team over Canada in 2014, potentially influencing the number of positive headlines compared to any other year. 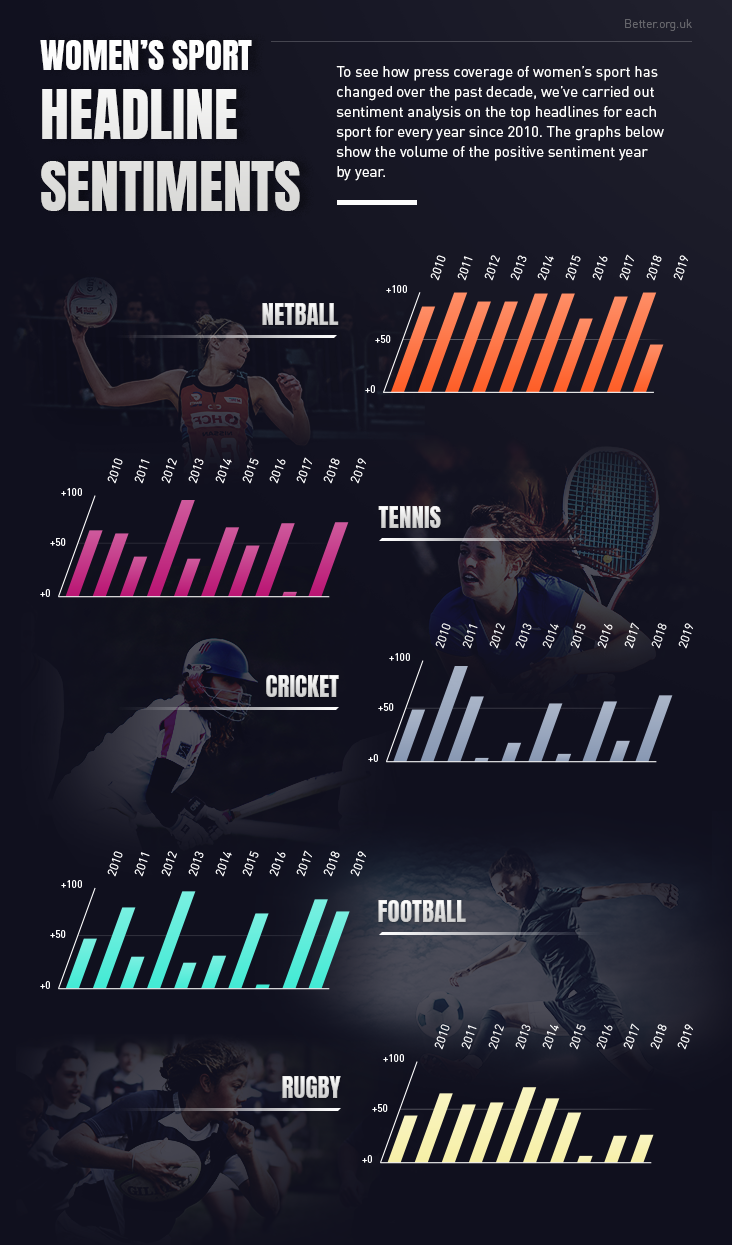 Women’s football is the most profitable it’s ever been, following the 2019 Women’s World Cup. The stadiums got bigger and so have the sponsorship deals. The sport’s popularity has grown over the last 10 years, with the FA, Sport England, The Premier League and The Football League Trust launching a joint programme to encourage more young women to play football in 2013. 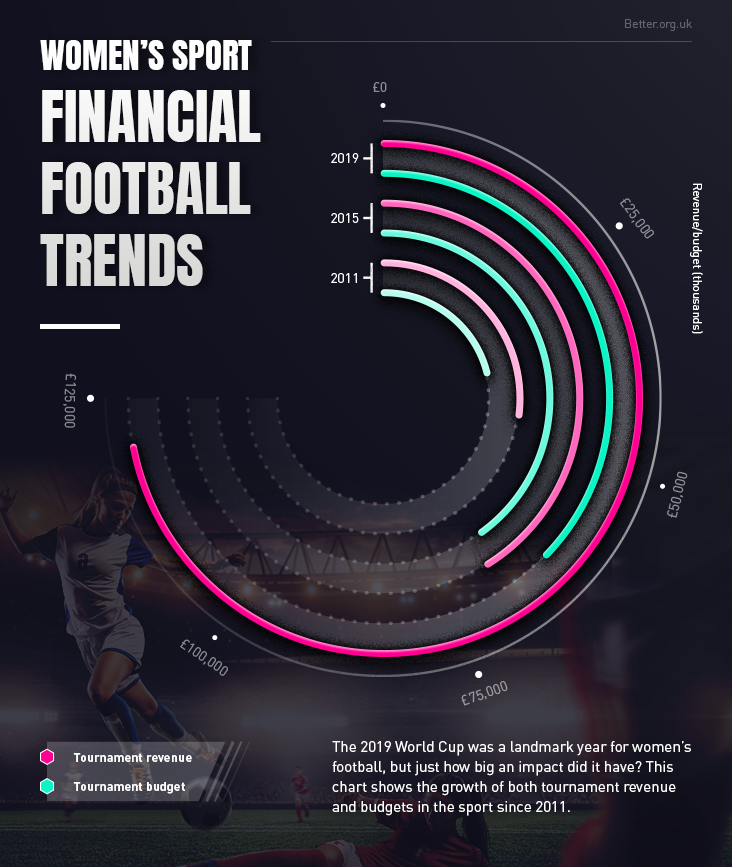 It’s been an uphill struggle – and although attitudes towards women’s sports are changing at an accelerating rate – the momentum around support and funding needs to remain positive for these encouraging results to continue. If accomplished, these data points will hopefully serve as a prediction of what’s to come for women’s sports in the future.

Why we love swimming

Forget the preconceptions, we show why yoga is for everyone

Check out yoga for everyone

Find a Better centre near you